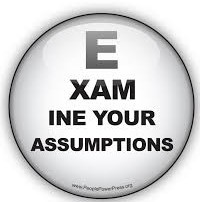 It’s always surprising when people assume based on their version of what reality “should” be, not taking into consideration someone else, in all probability, has a different version. Big assumptions bring big problems. I thought about this topic when I reconnected with someone I hadn’t seen in many, many years. We discussed our respective lives and pursuits. Eventually, we discussed my book. He admitted to having cheated on a few girlfriends in his youth. It seems infidelity is a rite of passage in some odd way.

We eventually chatted about marriage, something he’s never experienced. I asked if an infidelity conversation before committing to marriage would be an option. He replied, no. You sign the dotted line, that’s it, all other offers are automatically off the table. He assumed the signing spoke for itself. In a perfect world, yes, yet it’s blatantly evident reality has other plans.

Assumptions do not serve in romantic relationships (or much anywhere else for that matter). Assuming your mate is automatically going to be everything you’ve imagined–and faithful–without having a prior conversation about realistic expectations, is bound to lead to a less-than-ideal outcome.

When people say their mate should “know” I can’t help but think: based on what? Yes, there are instances where assuming isn’t that big of a stretch, but when it comes to psychological, emotional, sexual, and other subjects not readily discussed, how does anyone know? Were these topics discussed in the family home? Should the details have been figured out through life experiences? Osmosis? Are we assuming partners are intact and fully-formed when headed down the aisle? Half the time, mates aren’t aware of, or are afraid to express their own needs much less expect someone else to fulfill them.

I didn’t have this type of conversation when I was married. I assumed if I argued enough and voiced my very right points that would suffice. Well, I was very wrong. It’s now on the top of my list. If I find myself in a relationship, conversations will be happening along the way. I want to be free of assumptions and release the added energy that holds them.

Assumptions cause resentment and limitations. If you don’t understand why your partner doesn’t “get it,” then ask. Stay away from finger-pointing and festering. Ask where the thought is coming from and why he/she feels the way they do. You may be surprised, and relieved, by the answer.

We all carry a bit of assumption with us. When innocuous, maybe it’s not so bad. But when your happiness and health depend on it, it’s time to step away from learned behavior and step into awareness–especially if you assume otherwise.