Presidents and Infidelity: Red, White, Blue–and the Not So True 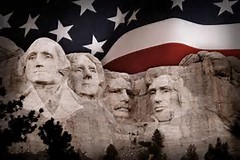 —Today is President’s Day. Specifically, it’s a day meant to acknowledge George Washington’s birthday. It now honors and encompasses all presidents and their terms. Some of these men, however, did not honor the terms of their marriage. Even the highest office one can uphold in the United States of America has been affected by infidelity; several times over. It’s an equal opportunity issue that draws no party lines, as our recent 2016 presidential campaign exampled: The Democratic Party’s presidential candidate was Hillary Clinton. Her husband is the former 42nd President, Bill Clinton, who has admitted to infidelity. The current 45th President, Republican Donald Trump, has outstanding accusations of alleged infidelity. Mud was slung on both fronts regarding past and present allegations. Everyone got down and dirty.

Here’s a list of past presidents who have had affairs:

This begs the question: Is it possible to completely separate competent public policy and decision making when entangled in adulterous liaisons? Some will argue that one’s private life has nothing to do with running a nation, or, the old standby: keep government out of the bedroom.

Since government leaders have been known to jump into various paramour’s beds, yes, agreed: let’s keep that type of government, as in, officials, out of those types of bedrooms. Some say, one’s character speaks volumes. If you’re cheating on your spouse, will you cheat the country? If you’re disrespecting your wife will you do the same to “We the People?” It’s an ongoing dialogue with never-ending fodder to fuel the fires. There will always be a new high profile betrayal right around the corner. FYI, Washington D. C. was the least faithful city in America (2013), according to Ashley Madison.

So, why aren’t we tired of the normalization of infidelity? Why aren’t we implementing a more proactive approach to decreasing those statistics? (Across the board, not solely in government.) This boggles. I guess it shouldn’t, all things considered, but that’s just it—all things have not been considered.

How about we consider this: Government is responsible for balancing our social and economic systems, right? Well, the trickle-down effects of infidelity impose on those systems. How? Let me count the ways. Emotional: people affected by adultery may depend on drugs to deal/not deal (more addiction), an abundance of mental health practitioners are utilized to process the trauma (truth), hospitalization costs when self-inflicted wounds or other forms of physical abuse are at play (did I mention murder?). Financial: pockets are drained due to divorce, loss of income and bankruptcy with welfare right behind to pick up the slack. The fallout is enormous—and it’s real. (Did I mention stalking, unwanted pregnancies, STDs, and HIV?) This is just the short form. What this translates into is excess money being spent unnecessarily. Guess who’s paying for that?

Foresight has its advantages, big ones. Thankfully, we have systems in place to help those in deep need, but what if the infidelity aftermath need was less? What if we preemptively educated our fellow American to help curb those costs? What if we decided to be less complacent, more aware, and better equipped to handle conflicts in relationships?

And, what if we asked this of our government and its officials as well?