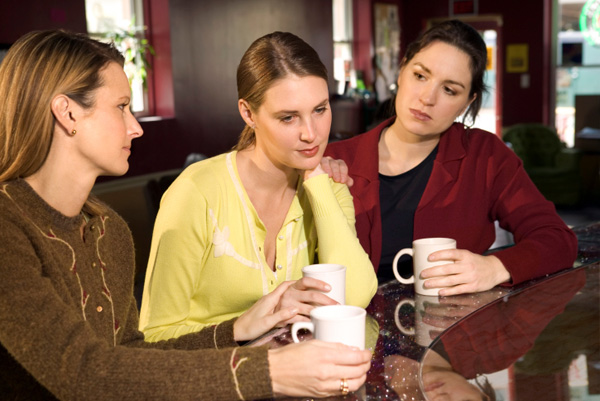 Each person’s reaction to the discovery of an infidelity is extremely personal and varied. Read Laura’s reaction (and the reactions of those she told) to her husband’s betrayal, and his profession of love for another woman. A multitude of interesting layers … some unexpected. FYI – infidelity is not one size fits all.

The week after my husband told me he thought he was in love with someone else, I emailed a group of close girlfriends with the news. My words must have been hysterical because the very next night they stopped their busy-lives-kids-husbands-making-dinner-supervising-homework and told me to meet them at a local café, which I did, where we sat and drank tea and I wept and wept and wept. And they listened.

And soon, hearing the news, friends and family began to react in ways that told me more about them than about me and this infidelity experience. My closest girlfriends started to call, phoning to tell me they love me, they are here for me, an invisible army out beyond the house where I can’t see them, rows and rows of people who support me unconditionally, waiting there to hold me in my arms if I needed holding or walk with me to happiness when I was ready to walk. My mom, in an atypical expression of outward emotion, told me she would be there for whether we got divorced or stayed married. A few friends, both male and female, told me they’d happily get in line to kill, maim, or strangle my husband (one of them sounded uncomfortably serious). A couple of girlfriends admitted they were so angry with him that they didn’t know how they were going to work through that (they are still struggling, I think, because their manner is different around him now). One friend never mentioned it, not for the entire five months of the affair nor the following two years of marriage recovery; to this date, she does not bring it up or ask me how I am.

I know that my story, and my telling everyone so openly and forcefully, was terrifying to many of our friends. “If this could happen to her, could it happen to me?” went the unstated refrain. “Would my husband do this? Is he capable of such a choice?” No one ever spoke those words but I knew they were there. My experience was a threat, something “other” that loomed on the edge of our nice middle-class world.

And yet. While this support was so beautiful, so unwavering, and so key to my eventual survival, there was something missing. No one said, “Hey I’ve been there.” No one ventured, “My sister has been through this.” I felt as if I was the only human on earth whose husband had betrayed her. Of course, I’d heard about infidelity – in movies and books, with celebrities and politicians – but I did not know anyone else like me who had been through it. Anyone else like me: educated semi-suburban wife and mom, married 20+ years, seemingly happy (though the marriage bore cracks) and basically successful. Feeling so uniquely marked in this way was like a scarlet “I” (for infidelity) worn, invisibly, on my forehead for an entire year. It was only later, once we began to rebuild our relationship and I started sharing with people too about that effort, that three girlfriends came to me with their own infidelity stories. Suddenly I was not alone.

Why is it so darn hard for us to share our stories? Yes, there are many emotions attached to infidelity: shame, embarrassment, and plenty of others, that project deep discomfort. Staying in that place prevents us from stepping forward, even with a close friend. I cover something similar in my book.

If we don’t talk about it, we’ll never figure out how to deal with it effectively. Knowledge beforehand is a thousand times better than waiting for the other shoe to drop, possibly on someone else’s floor.